The representations of cetaceans in ancient Greek culture

The representations of cetaceans in ancient Greek culture

From Canada to China passing by Australia, dolphins and whales are portrayed in so many ways that denote the beliefs and representations of each society. Most of the time, they are described as divine, having supernatural powers. Thus, in Australia, Aboriginals offered food to big cetaceans as they believed them to be the reincarnation of dead warriors. In Canada, Inuit have their own explanation of the narwhal’s unusual tooth form. Furthermore, both the Bible and the Coran contain strong references to cetaceans.

The word “cetacean” comes from the Greek word “Ketos” which means sea monster. Ketos in ancient Greek mythology was an ancient goddess and the daughter of Gaia (the earth) and of Pontos (the wave).  The word is now used to refer to dolphins and whales.

In this article, we focus on the representations of cetaceans in ancient Greek culture. The Greeks left us with plenty of data to work with, helping us to better understand their culture. Greece is composed of several small islands, making the ocean the hub of Greek culture. Therefore,  it is no surprise that the inhabitants were use to frequent encounters of sea creatures.

Legends hold that Apollo, the god of beauty, poem and art, transformed himself into a dolphin to wander the earth in search for a place to settle his temple. Dolphins were henceforth associated with Apollo, from the city they named Delphi.

Dolphins are also often portrayed as symbols of Poseidon. According to mythology, the god of wine, aka Dionysus, traveled in a ship with the appearance of a simple human being. He heard the sailors conspire against him, wanting to sell him into slavery. Angry, the god threw all crew members overboard into the sea. Poseidon took pity on them, and transformed them into dolphins. Then, they were mandated to guide the ships. This tale is one of the reasons why the Greeks believed that a special connection existed between dolphins and humans.

The proposal of Poseidon 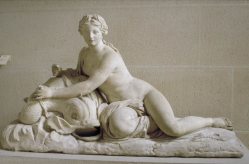 The god of the sea fell in love and desired to marry Amphitrite. But she didn’t feel the same. Poseidon then sent his servants to her in order to make her change her mind. Delphinus was the one who succeeded and to thank him, Poseidon allowed him to join the heavens as a constellation. The Delphinus constellation can  only be seen in the northern hemisphere. 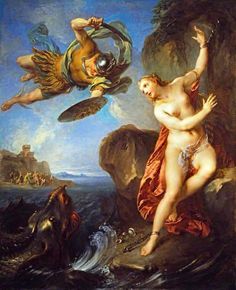 Princess Andromeda was said to be more beautiful than the nymphs serving Poseidon.  For revenge Poseidon sent a flood to the island so that “a sea monster” can destroy every beast and human. The king, being alerted, decided to sacrifice his daughter. She was anchored to a rock, but was saved by Persee who was in love with her.

Muses: the subject of many works

A regular topic for artists

Dolphins and whales are also used as muses for singers, painters, sculptors, and writers. The singers refer to the tale of Arion, believed to be the best musician of the world.   Legend tells the story of Arion kidnapped by pirates who wanted him dead. Pleading his live, he started to sing. His music pleased a dolphin that came closer and  offered him a ride home on his back.

We found pictures of dolphins in numerous ceramics well conserved as well in mosaics.

This cup is from the 6th century BC

They depict the common dolphin and the striped dolphin, usually realistically portrayed. They also appeared as guest stars in Odysseus by Homer as they rescued Telemachus and the poet Esope dedicated a poem to them.

The custom of stamping the profile of a dolphin on coins as a token of good luck predates Greek culture and has survived up to this day.

An ambivalent picture of women

Aphrodite, Eros and and a dolphin

Dolphins also shaped the representations of women. Always described as female creatures, the name Ketos refers also to “animal uterus of the sea”. Dolphins are usually painted as a pod rather than individuals, which is said to represent fertility and maternity.  Along with Poseidon and Apollo, they are also identified with goddesses Aphrodite and Artemis.

Aphrodite is the god of love, seduction and beauty. Born in the sea, she also represents fertility. In more general terms, water represents womanhood. Contradictory to this, Artemis is the god hunting and  chastity, It is therefore believed that no life comes from her. In Greek culture, both goddesses represent the ambivalent features of women; life and death.

This theory is derived from the ‘theory of Humorism’ which has influenced medical science into the 19th century. 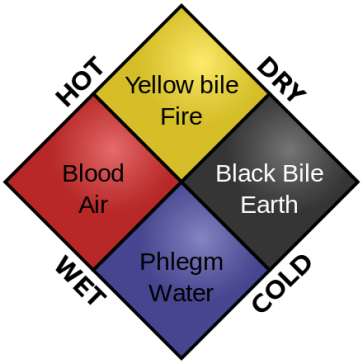 The theory links the four elements (water, earth, fire and air) to four fluids (blood, yellow bile, black bile, phlegm) in the human body which are believed to affect the individual’s personality and behaviour. A person is said to be healthy when the four fluids are in balance. Fictional characters are often developed based on the ‘humors’ (i.e. fluids). Women are usually described to fall under two categories, labeled as “wet” and “hot”. Being too “wet” is considered to be a sign of death. Therefore, paintings of dolphins, especially relating to Greek mythology, should be considered as symbolic messages.